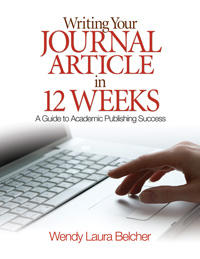 The writing life is filled with rejection. This is one of the few shared experiences of great writers and terrible writers. A quick read of Pushcart’s Complete Rotten Reviews & Rejections offers the comfort of knowing that most canonical authors (for instance, Hermann Melville, T. S. Eliot, and Virginia Woolf) had their work rejected in the strongest possible terms (Henderson 1998). Jack London received 266 rejection slips in 1899 alone (Kershaw 1997)! The economist George Akerlof received three rejections for a journal article that later won him the Nobel Prize (Gans and Shepherd 1994). Indeed, studies of Nobel Prize winners found that editors had rejected many early versions of their award-winning work (Campanario 1995, 1996). If you write, you will be rejected. This is unavoidable. The important thing is not to let it stop you.

Although it is tempting to let others’ criticism be the measure of your writing or even your own worth, don’t let it be. The business of reviewing is a subjective process rife with bias and carelessness. Work rejected by one journal is often embraced by another. The only difference between much-published authors and unpublished authors is often persistence and not worthiness. Published authors just keep submitting their work. If one journal rejects their article, they send the article to another. They keep a positive attitude. A professor I know has fond memories of her dissertation advisor, who papered his office with his article rejection notices. To see him working away amidst the negative notices of a lifetime, she says, was inspiring and encouraging.

Several of my students have exemplified the usefulness of persistence. In one of my classes, Carrie Petrucci revised her wonderful article arguing for introducing the apology into the criminal justice system. She knew that resistance to her argument would be high, but felt committed to demonstrating that criminal apologies provided some real benefits for victims and perpetrators. So she was very disappointed, but not surprised, when the first journal rejected her article. Petrucci stopped everything she was doing and took two days to make changes based on the comments she had received from the editor and previous readers. She then sent it right back out again to another journal, this time to a social science journal rather than a law journal. After that second journal also rejected her article, she again devoted two days to making changes. Making writing social helped her persevere. “What kept me going through two rejections,” she e-mailed me, “was the fact that I had had several people read it prior to my submitting it to any journal and a handful of those people, who had nothing to gain by it (including yourself), had given me the impression that it was strong. . . . Believe me; I clung to those comments as I got some pretty negative feed- back on rounds one and two.”

So, she sent it out a third time, to an interdisciplinary journal in law and social science. A few months later, she got a message from that journal accepting her article for publication and stating that the reviewers were extremely enthusiastic about the piece. “Congratulations,” the editor exclaimed. “It is quite unusual to have a manuscript accepted without requiring any changes. But yours is a high quality product. Good job.” Her persistence paid off. She later won the first Nathan E. Cohen Doctoral Student Award in Social Welfare in 2002 for this article and then got a job working to improve the criminal justice system (Petrucci 2002).

One of my students told us the story of a friend who was more faint-hearted. When she received a response from a journal, she opened the letter with trepidation. The first paragraph included the sentence: “The reviewers’ reports are in and both agree that your article is severely marred by poor writing.” Upset, she flung the letter aside and spent an hour in bed ruing her decision ever to enter academia. When her husband got home, he picked the letter off the hallway floor, read it, and entered the bedroom saying, “Congratulations, honey! Why didn’t you tell me your article got accepted?” Upon actually reading the letter through, she found that the editors had accepted the article pending major revisions. She hired a copy- editor to work with her on her prose and resubmitted the article. When starting out, harsh criticism can stop you in your tracks, but if you persist, you often find that things are not as bad as they seem at first.