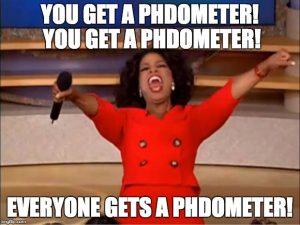 After 5 years of busting a gut to produce AcWriMo annually, I (Charlotte Frost) have had to bow out this year. My personal and professional commitments mean it simply isn’t possible for me to organise the content and corral you all into absurd levels of productivity. So I’ve taken the difficult decision of not being the AcWriMo producer for 2017.

But AcWriMo was designed from the start to be a community endeavour. I’s YOU who really make it happen!

By committing publicly to your goals and keeping yourself and others accountable – in real and virtual communities – YOU are the ones who have made November so darn productive year after year!

Last year we substantially updated the PhDometer app and made it free so that you no longer need to grapple with a spread sheet of 1000s of entries in order to log your progress. Instead you simply open the app and type away – sharing your results as and when you like. And if you opt into it, these results go onto the leader board, giving you the same public accountability you’ve always had – in less of the time.

The idea behind the app update was to put even more of the power in YOUR hands.

There will be no less activity this November – many teams, individuals and organisations have already been in touch telling me what they’re planning. And you can still download our toolkits for hosting your own team. Just like every other year, you just need to hop onto social media now and again and check out the #AcWriMo hashtag for all the advisory goodness and community support. You just won’t find it on the PhD2Published blog this time.

Wishing you every success!