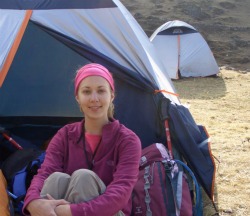 How’s AcBoWriMo going? Written an insane amount yet? No? Not good enough people so I’m dishing up some tough love…

When I was about eighteen months away from finishing my PhD I had a phone call I will never forget. It broke the news to me that my oldest friend had died in a car accident with her boyfriend.

A couple of months later, as all writing productivity had ground to a halt, I tried to think of a way to motivate myself. Family and friends did an amazing job of keeping me going through this intensely difficult time, but the drive to succeed in my PhD – in anything – was definitely gone.

Eventually, I noticed a nagging feeling inside. I felt there had to be something I could do to somehow keep a piece of my friend with me. I thought about it some more and decided that I wanted to conjure her up in an activity that would literally propel me forwards and help me find myself again. So I thought: what would Georgie do that I wouldn’t? Or, what could I do that I’ve never considered possible before? And finally, wherever Georgie is, what could I do to make her laugh her head off at me?

And then I had it! So before I could think it through, I signed up for a ten day charity trek across a remote part of Peru.

If you had known me before all this, you would know this was a very big deal. I had to get fit and be able to walk for ten hours a day – I should clarify that most days I’d have trouble opening a bag of crisps – so you can see this wasn’t going to be my forte! I had to camp in desolate parts of the Peruvian mountains without running water, without washing for the duration of the trip, and with the, er, bonding experience of very publicly going to the loo. Of course this meant no cute clothes and make-up, which was hard enough, but it also meant drawing on an inner reserve I hadn’t put to this kind of use before. Low blood pressure was going to add altitude sickness to the mix and a dodgy nose meant Ms Nosebleed was going to be a frequent visitor. And on top of all of that, I had to raise at least £2,000 to do it!

In some ways, raising money for charity was just as hard as the training. It stretched my marketing skills to their limit and together, these things ate even more of my time. I would rush around in the week conjuring money-making schemes and at the weekend, don my boots and walk until I dropped. I’m sure my PhD supervisor wondered if I would ever take to my keyboard for anything PhD-related ever again.

But then something happened: I got good at my new life.

Suddenly, a weekend of hiking was more empowering than anything I’d ever done before. I would burst with pride and excitement at knowing how far I could walk and at seeing the parts of the countryside you can only ever see on foot. Meanwhile, money started to roll in and, very quickly, I’d raised over £5,000 – far exceeding the target I’d set for myself.

One magical afternoon, caked in mud and more tired than I ever thought I could be while still standing up, I watched two condors circle Machu Picchu, and I made peace with the part of me I lost when Georgie died. I decided that what would survive of Georgie in me, was simply that, survivorship. I knew she’d laugh at me there that day, making such a big deal of losing her (and not wearing heels).

Some months later I wrote the following in my thesis acknowledgments:

Last but not least, I’d like to mention Georgie Robinson, my dear, departed friend. This thesis was a lot harder and took a lot longer because of losing her, and because of the decision I made to honour her memory by trekking through the Peruvian mountains to Machu Picchu – raising just under £10,000 for the Rainbow Trust Children’s Charity. To all my other friends who I would walk anywhere and everywhere for, I thank you for your patience!

I learned the hard way that some things are just bigger and more important than academia, everything else is just writing (and teaching and service and….)!

Now suck it up and write (or raise money for charity, your choice)!