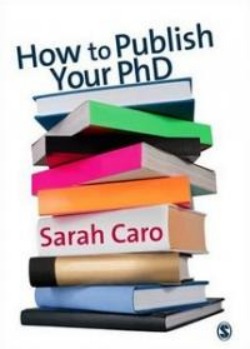 Sarah Caro, author of How to Publish Your PhD has kindly offered us this six-part guide on revising a thesis for publication as a book. Over the coming weeks she’ll be explaining how to understand what type of book you can produce as well as discover ways of shaping it up into a more book-like body of material.

Returning to the example thesis from last week, let’s look at content. Here’s the thesis outline:

Chapter 4: Social and political factors affecting X in the Netherlands 1975-1990

Chapter 6: Some additional factors affecting X in the Netherlands and Austria

Chapter 7: The impact of X in the Netherlands and Austria: a com­parative perspective

Chapter 8: Consolidating X in the Netherlands and Austria References Appendix 1 a

Chapters 4-8 follow a repetitive structure of looking at x in relation to y, then in relation to z, then in relation to y and z and finally drawing conclusions from all three. To turn it into a viable monograph and appeal beyond a very limited audience (those inter­ested in X in the Netherlands and Austria in a 15 year period) you might want to consider broadening the scope of your study. This may at first seem contradictory advice as I have said less is more, but by increasing the number of case studies, in this example, perhaps by look­ing at social and political factors affecting X in a range of European countries, you are substantially increasing the potential market for your book and it immediately begins to feel like a piece of mainstream aca­demic work. While monographs are often by their very nature more specialized than say a textbook or a book for a general audience, they are generally broader in their subject matter than the average thesis. The proposal discussed above shows this clearly and there are plenty of ways in which you can broaden the scope of your book including:

Of course this will involve a considerable amount of extra work. It may delay how quickly you can publish your book and you will have to spend some time thinking about how you will choose which addi­tional countries to include in your study (for instance). This decision may be affected by what data on the topic is already available for a specific country, the quality of that data, or how feasible it is for you to collect additional data yourself. You will also need to consider how the new material would be incorporated thus raising new issues of structure and content. In the case of more theoretical work it may involve considerable extra reading around and beyond the areas you have most expertise in to familiarize yourself with new research and debates. Whatever you decide to do, if it looks as if it is likely to involve months of work rather than a couple of weeks do consult with colleagues and advisors and think about putting together a proposal first (which I cover in my book) outlining the proposed changes. You can then try it out on a few publishers first and if you get a positive response carry on. If they don’t seem very enthusiastic even with the extra material it would be a real shame (not to mention a terrible waste of your time) to put all that work in and still not get published.

Before we leave the topic of restructuring completely and turn to other aspects of the revision process, it seems only fair to spend a few more moments on the proposal we have discussed at length as an example of what not to do and consider what the author might have done. The first, most obvious thing is to lose the appendices. One is acceptable, even two on occasion if there is a lot of data or there are important methodological issues, but six is excessive. Second the literature review has to go. That does not mean that all of the material contained in that chapter has to be cut but it needs to be integrated into the text as a whole rather than presented as a self-contained exercise. Next the author needs to think further about the narrative flow of the book. The first chapter should engage the reader and lay out the key themes and substantive areas to be covered as well as the main thesis of the book. It should be an intellectual road map from which the structure of the rest of the rest of the book naturally follows. This may well be what the existing Chapter 1 does but it needs to be presented in a more appe­tizing way than the current chapter title suggests.

So how might this work in practice? If this exercise is to have any real meaning we need to ascribe a value to X, so let us assume for now, quite arbitrarily, that X stands for immigration, although it could just as easily be the emergence of protest groups, feminist literature, inflation or any one of a vast range of topics. Chapter 1 as we have already discussed needs to map out the structure of the book and its major themes and argument so it needs to have a good catchy title, preferably one that includes the word immigration, the key concept in the book. Chapter 2, currently the literature review, might, in the course of providing some useful background material on previous waves of immigration in Europe, incorporate into this historical perspective a discussion of the way the study of immigration, and in turn the academic literature on immigra­tion, has developed. Note though that in the suggested table of contents below I have limited this to the post-war period. This will be quite a chal­lenge in itself but restricting it to a period of 50 years ensures that suffi­cient background material is included to provide depth and context but not so much material as to be unmanageable or indeed detract from the main focus of the book. Chapter 3 would then present some empirical data on immigration in Europe, highlighting the methodological chal­lenges involved in collecting such data, and perhaps using the Netherlands and Austria to illustrate this point. Chapters 4 and 5 could be left pretty much as they are but would incorporate Chapter 6 so that they each presented a comprehensive overview of the key factors affecting immigration in the countries they were covering. Chapter 7, now Chapter 6, would focus on the key similarities and differences in the impact and experience of immigration between the two countries. The new Chapter 7 would then build on these findings to discuss the impact of immigration more broadly and to discuss future developments on a European level drawing from the Austrian and Dutch experiences. You would then have a book that looked something like this:

Chapter 4: A Post-colonial Legacy: Immigration in the Netherlands

Chapter 7: Drawing on the Past, Looking to the Future: Possible

Patterns of Immigration in the New Europe

While the above is a somewhat rough and ready reworking of the material it is intended to give you a sense of the kind of restructuring and the imaginative but practical approach necessary when turning your thesis into a book. Imaginative because you have to step outside the box that has been your thesis, but practical because as we have already discussed there are limits to how much new research you can do and incorporate if you wish to publish relatively swiftly. In this case I have created a sense of a broad canvas through the use of key words in the chapter headings and by providing wide ranging contextual chapters (2 and 7) to frame what are essentially two quite narrow case studies (Chapters 4 and 5). Alternatively you could, as discussed above, expand the time frame to perhaps focus your empirical chap­ters on immigration in the Netherlands throughout the whole of the post-war period and intersperse some of the material on Austria by way of contrast or comparison. Or vice versa. Or include more coun­tries, but restrict yourself to the shorter time frame. Looking at the outline again I can already see ways in which you might improve it further. You could for instance quite plausibly swap Chapters 1 and 2 around. The important thing is to keep trying things out until you arrive at a new structure you are comfortable with and feel confident that you can flesh out.